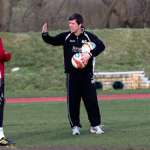 The Whites kicked off their pre-season training today, with blistering heat adding to what Manager Darrell Clarke says will be a tough pre-season programme:

“I’m delighted that the players are back in for the first day of pre-season training,” said Darrell.
“The boys have had fitness programmes to adhere to over the Summer up until now, and they’re looking like they’re in great shape.”

The Whites have an exciting series of pre-season friendlies, with a range of home and away matches including exciting fixtures against Bristol Rovers and Bath City.

Spirits in the camp are high, according to Darrell:

“This will be one of the hardest pre-seasons that we’ll have, but the lads are in great spirits and looking forward to the Bristol Rovers home game on Monday – a 7:45pm kick-off.”

Darrell also revealed to us that there are a number of trialists training with the club today, who he is keeping a close eye on and who will be playing a part in the pre-season friendlies:

“We’ll be evaluating them over the new couple of weeks. We’re still looking to bring 2 or 3 players in to fill in the missing pieces of the puzzle and make sure we’re ready for the coming season.”

We wish all those players the best of luck in their career and thank them for their efforts on our behalf for last season.