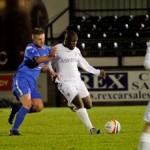 It was a very successful season for the Youth Academy in 2010-11. The FA Youth Cup is our biggest and most glamorous competition of the year and the side performed admirably with away wins at Sholing (3-0) and then again at AFC Totton (3-0). Unfortunately the side missed out on a prestigious home tie against League 2 club Swindon Town after losing a 2-0 loss away to Forest Green. In the Hampshire Floodlight Cup the side enjoyed a good run reaching the semi-final before losing a close match against Aldershot Town after extra-time in a game played at the Ray Macelpine Stadium. The Academy also enjoyed a very solid season in the South West Counties Combination League eventually finishing in 5th place. The Academy also play collegiate fixtures and enjoyed a superb season, finishing 2nd in the Hampshire Colleges 1st division and also reaching a National Colleges Cup final and the Hampshire Colleges Cup final.

The primary aim of the Academy is player development and ultimately, to provide players for the Salisbury City first team squad. A number of scholars (see photos) made the step-up to the senior set-up during the 2010-11 season with Harry Franks, Juevan Spencer, Ope Aromona and Michael Dixon all making appearances for the senior side. However, the most successful Academy graduate was Claudio Herbert who has grabbed his senior opportunity having featured in a handful of games to start the 2011-12 season.